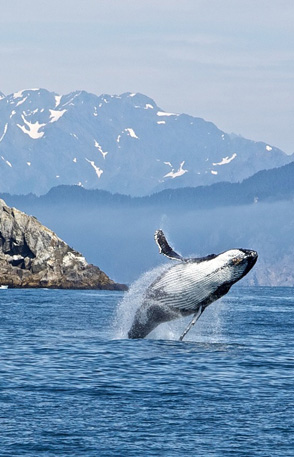 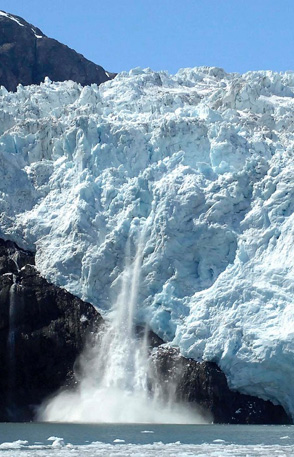 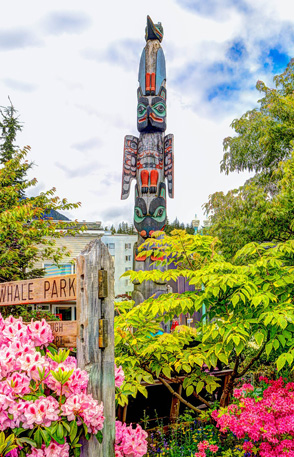 Explore the fascinating wildlife, rugged wilderness and awe-inspiring natural wonders of Alaska on a cruise. Marvel at the soaring mountains and massive glaciers of Alaska as we sail from Anchorage, Alaska to Vancouver, British Columbia. This cruise is the perfect add-on to our Alaska Land Adventure. 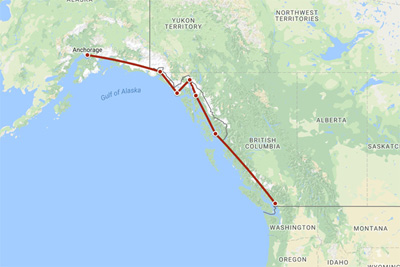 Welcome to Alaska!
Whittier, approximately 65 miles southeast of Anchorage, lies nestled at the base of the Chugach Mountains bordering Passage Canal. Established as a World War II port for cargo and troops of the Alaska Command, Whittier remained activated until 1960. Today, Whittier's economy and its 290 residents rely largely on the fishing industry, the port and, increasingly, on tourism.
Once accessible only by boat or via a war-era railway tunnel, The Anton Anderson Memorial Tunnel was recently enhanced to accommodate highway traffic as well, making it the longest highway/rail tunnel in North America at 2.5 miles.
Named for the poet John Greenleaf Whittier, the community is also the gateway to spectacular Prince William Sound, with its magnificent tidewater glaciers and abundant marine life.
Accommodations - Royal Princess

Nicknamed the "Galloping Glacier," this east Alaskan glacier is rapidly advancing toward the Gulf of Alaska into a pristine area known as Disenchantment Bay. In fact, its movement temporarily formed a natural dam that twice closed off nearby Russell Fjord from the bay, but the intense water pressure building within the fjord-turned-lake has thus far been enough to explode through the wall of ice.
The largest tidewater glacier in North America, Hubbard Glacier measures 76 miles long and plunges 1,200 feet into the depths of the bay. Its immense beauty and phenomenal blue hues are enchanting, even from afar. But it's when your cruise ship draws closer that its towering surface really impresses, dwarfing even the uppermost deck on your ship at a whopping 40 stories high. There, with the snowcapped mountains serving as a glorious backdrop, you'll have a prime viewing spot from which to witness the glacier calving, as it often expels icebergs the size of 10-story buildings-imagine the splash!
The area around Hubbard Glacier is also renowned for its wildlife, where whales, harbor seals and otters swim, brown bears, moose and black-tailed deer roam ashore, and a wide variety of seabirds soar gracefully across the sky
Accommodations - Royal Princess

Princess is one of a select few cruise lines permitted to cruise the pristine waters of Glacier Bay, the highlight of our 7-day Voyage of the Glaciers cruise. Just west of Juneau, this breathtaking national park and preserve boasts some of the world's most spectacular tidewater glaciers, such as Margerie Glacier, which often drops colossal chunks of ice into the sea. Not surprisingly, Glacier Bay National Park and its epic ice giants are part of a UNESCO World Heritage Site comprising Alaska's magnificent park system.
During your scenic cruise, friendly Park Rangers will join the ship to share their knowledge of this amazing place and host a fun Junior Ranger program for kids. They may even be able to help you identify Glacier Bay's abundant wildlife, including humpback whales, sea otters, porpoises, harbor seals, black bears, mountain goats, bald eagles and large colonies of seabirds.
Take in the awe-inspiring scenery as you enjoy an unforgettable day of sailing through this dazzling park, where you'll glide along emerald waters and past calving icebergs, and can breathe in the crisp, fresh air to your heart's content
Accommodations - Royal Princess

Skagway was the gateway to the gold fields for the thousands who flocked to Alaska and the Yukon with the hope of striking it rich. Skagway may have boasted the shortest route to the Klondike, but it wasn't the easiest.
Over 100 years ago, the White Pass route through the Coast Mountains and the shorter but steeper Chilkoot Trail were used by countless stampeders. Many a would-be miner perished on the treacherous Chilkoot Trail.
The gold rush was a boon and by 1898, Skagway was Alaska's largest town with a population of about 20,000. Hotels, saloons, dance halls and gambling houses prospered. But when the gold yield dwindled in 1900, so did the population as miners quickly shifted to new finds in Nome.
Today, Skagway has less than 1,000 residents. It still retains the flavor of the gold rush era.
Accommodations - Royal Princess

In 1880, it was slow going for Joe Juneau and Richard Harris as they searched for gold with the help of Native guides. After climbing mountains, forging streams and facing countless difficulties, they found nuggets "as large as beans."
From their discovery came three of the largest gold mines in the world. By the end of World War II, more than $150 million in gold had been mined. Eventually the mines closed, but the town Joe Juneau founded became the capital of Alaska and the business of gold was replaced by the business of government.
Some 30,000 people live in Juneau. Its total area makes it one of the biggest towns, in size, in the world. Only Kiruna, Sweden, and Sitka, Alaska, exceed Juneau's 3,248 square miles.
Today Juneau is famous not only for gold and government but also for its breathtakingly beautiful glaciers and stunning views of both water and mountains.
Accommodations - Royal Princess

Ketchikan is known as Alaska's "First City" because it's the first major community travelers come to as they journey north. Located on an island, Ketchikan began life as an Indian fishing camp. The name Ketchikan comes from a Tlingit phrase that means "eagle with spread-out wings," a reference to a waterfall near town.
In the early 1900s, when gold was Alaska's claim to fame, fishing and timber industries were established in Ketchikan. The growth of these industries helped make this Inside Passage port Alaska's fourth-largest city.
Visitors to Ketchikan will be intrigued by its rich Native heritage, which includes the world's oldest collection of totem poles at Totem Heritage Center. The Haida, Tlingit and Tsimshian are all a part of the city's colorful history. Ketchikan, with its abundance of salmon, is also a sportfishing paradise. Sightseers will be impressed with both the scenic town and its surroundings, especially Misty Fjords National Monument.
Accommodations - Royal Princess

Enjoy a relaxing day at sea and the onboard amenities as we sail south.
Accommodations - Royal Princess

It seems unlikely that a character named "Gassy Jack" Deighton would be responsible for one of the most beautiful cities on the continent. But that's history for you.
During the gold rush, Gassy Jack saw a chance to make money from the hordes of miners on their way to the Yukon. The saloon he built became the focus of the shanty town known as Gastown. From that ragtag group of shacks, modern Vancouver was born. The provincial government persuaded settlers to change the name of the town to Vancouver, after Captain George Vancouver, who sailed the region's waters in 1792.
Canada's third-largest city, Vancouver is a cosmopolitan place with a European feel and a personality all its own. It's a community with a rich ethnic mix - including the second-largest Chinatown in North America - and stunningly beautiful parks.

It is time to say good-bye to this beautiful destination and fabulous new friends. Transfer to the aiport for your flight home or continue to your hotel in preparation of your Rocky Mountain Rail Journey.

Pre-book now to hold your spot. As soon as we have full details and pricing we will let you know. At that time you can decide if you would like to confirm this tour. If you do book you will save $100 off the tour as a thank you for showing us your interest.

Single Occupancy - TBA CAD per person (your own room)

Deposit of TBA per person due at time of booking.

*All payments are non-refundable Please see full terms and conditions.

Moderate Activity
There are a few walking tours at a relaxed pace.

Marianne Southall
Marianne is the founder of the Women's Travel Club. She is well traveled and loves to get off the beaten path, her favorite type of tour would involve nature and animals.

Once your flights are booked please forward a copy of your itinerary to info@womens-travel-club.com.
A Women's Travel Club agent is available to help you book your flights. Please do not book any flights until tour is confirmed. Follow this link to a form to request flight options and quotes. A Women's Travel Club agent will send you back the recommended flight option that best suits you. We are pleased to offer a flight booking service for your tour. As quoting of flights can be a time-consuming endeavor, a service fee of $113 ($100 plus HST) will apply.

Arrive to Anchorage, Alaska
Depart from Vancouver, BC

Out of country medical insurance is required. We strongly recommend that you obtain cancellation and interruption insurance to protect your investment.
Use this link to request an insurance quote.
Insurance Quote 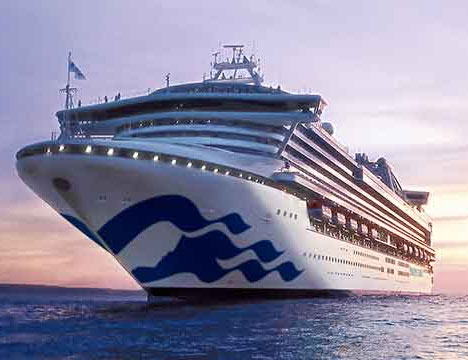 From its breathtaking piazza-style Atrium to the dramatic views from the glass-floored SeaWalk®, Royal Princess is sure to delight. Relax at The Sanctuary, a tranquil haven reserved for adults, watch the mesmerizing Princess WaterColor Fantasy light and water show, or dine on tantalizing cuisine at venues like Crown Grill and more. 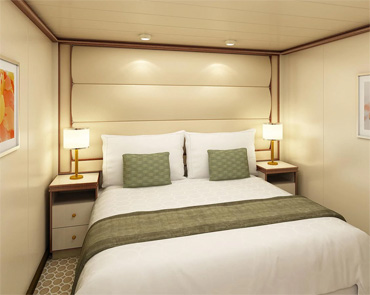 These staterooms are the perfect place to recharge your batteries. Our most affordable option, featuring two twin beds or a queen-size bed. Other amenities include a refrigerator, hair dryer, TV, closet and bathroom with shower. 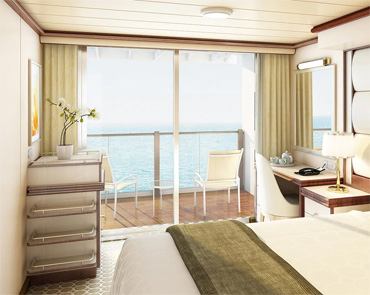 This impressive stateroom offers the added indulgence of a balcony and gives you more space than a standard stateroom. Enjoy your own private outdoor space with a table, two chairs, and a relaxing view of the inspiring scenery surrounding you, whether a beautiful sunset over the ocean or a new city to explore. It’s also perfect to enjoy cocktails before dinner or a leisurely breakfast.

Often ladies will book a night at the first hotel prior to the tour. This gives them a chance to relax after a long flight and settle in before the tour starts. Let us know if you would like pricing and information on the hotel.
Follow this link to request pre or post tour hotel nights.